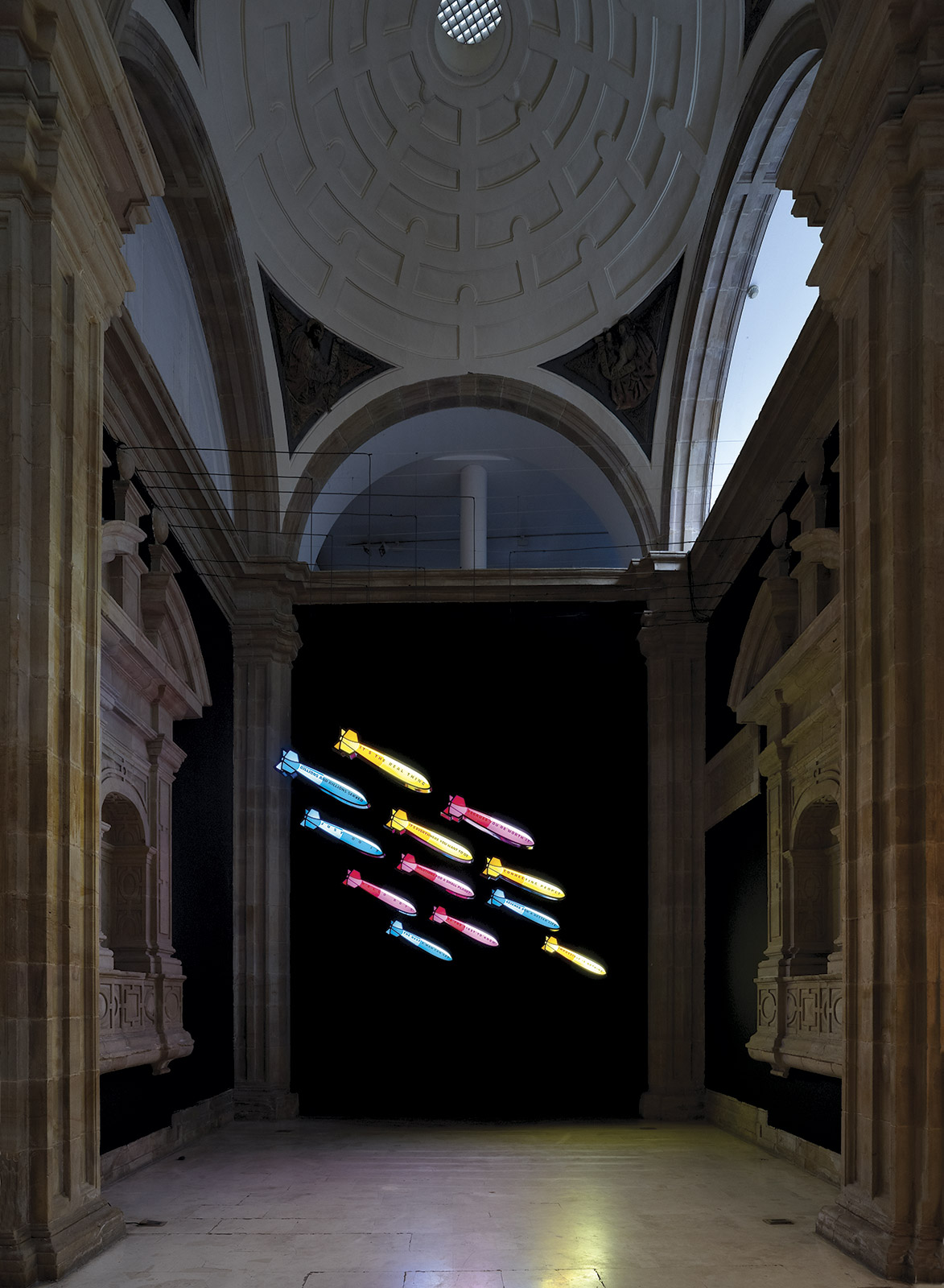 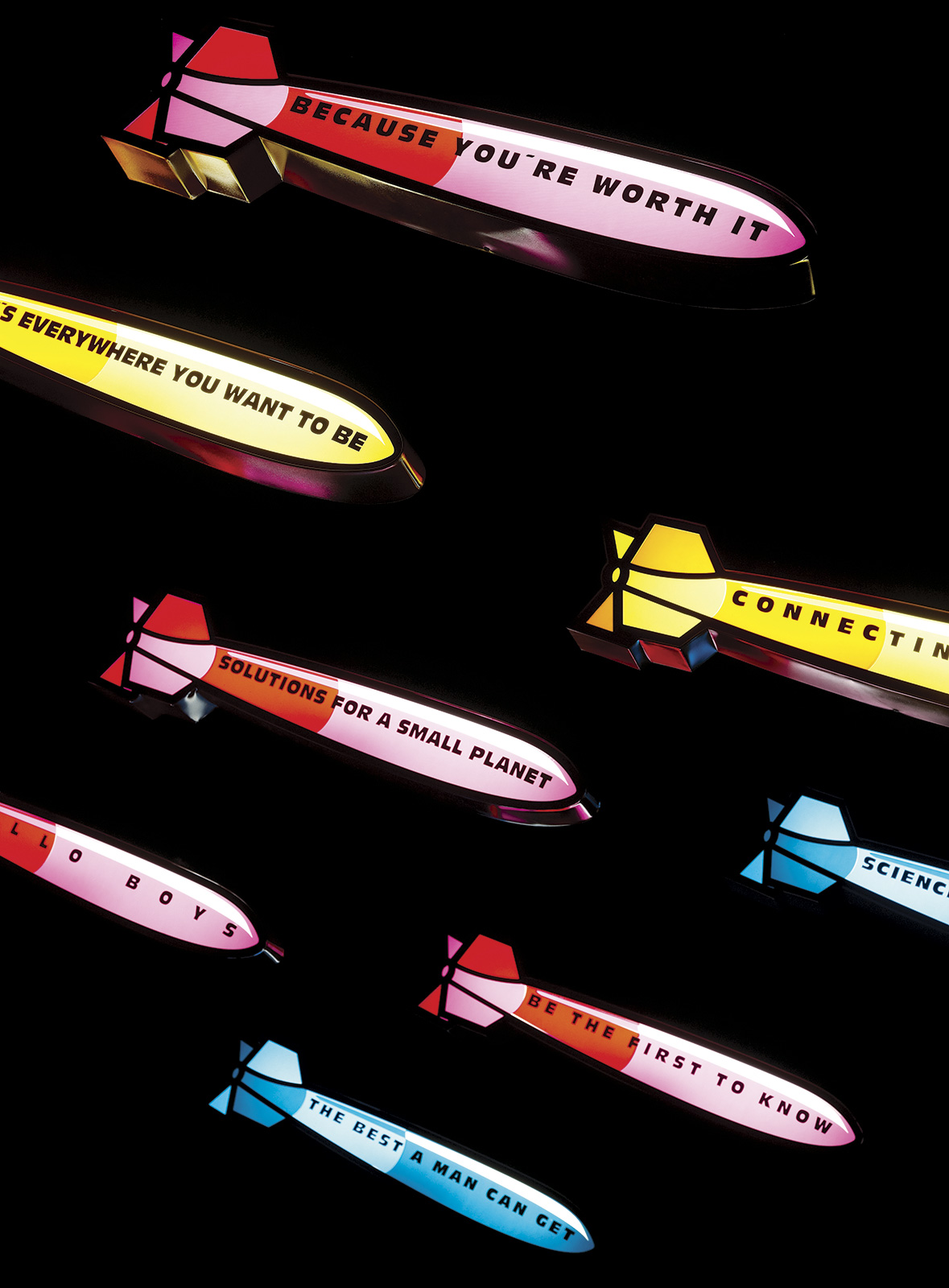 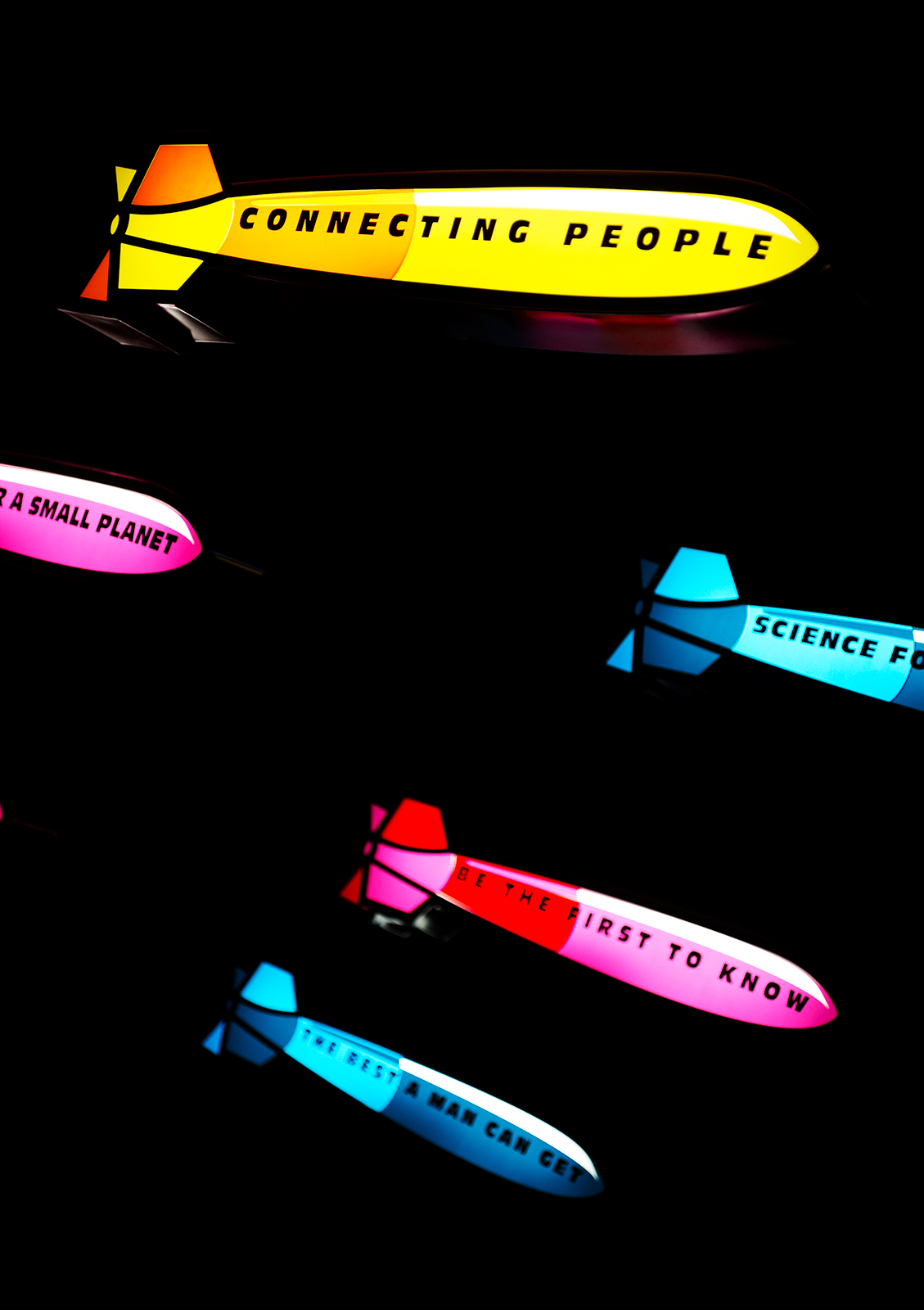 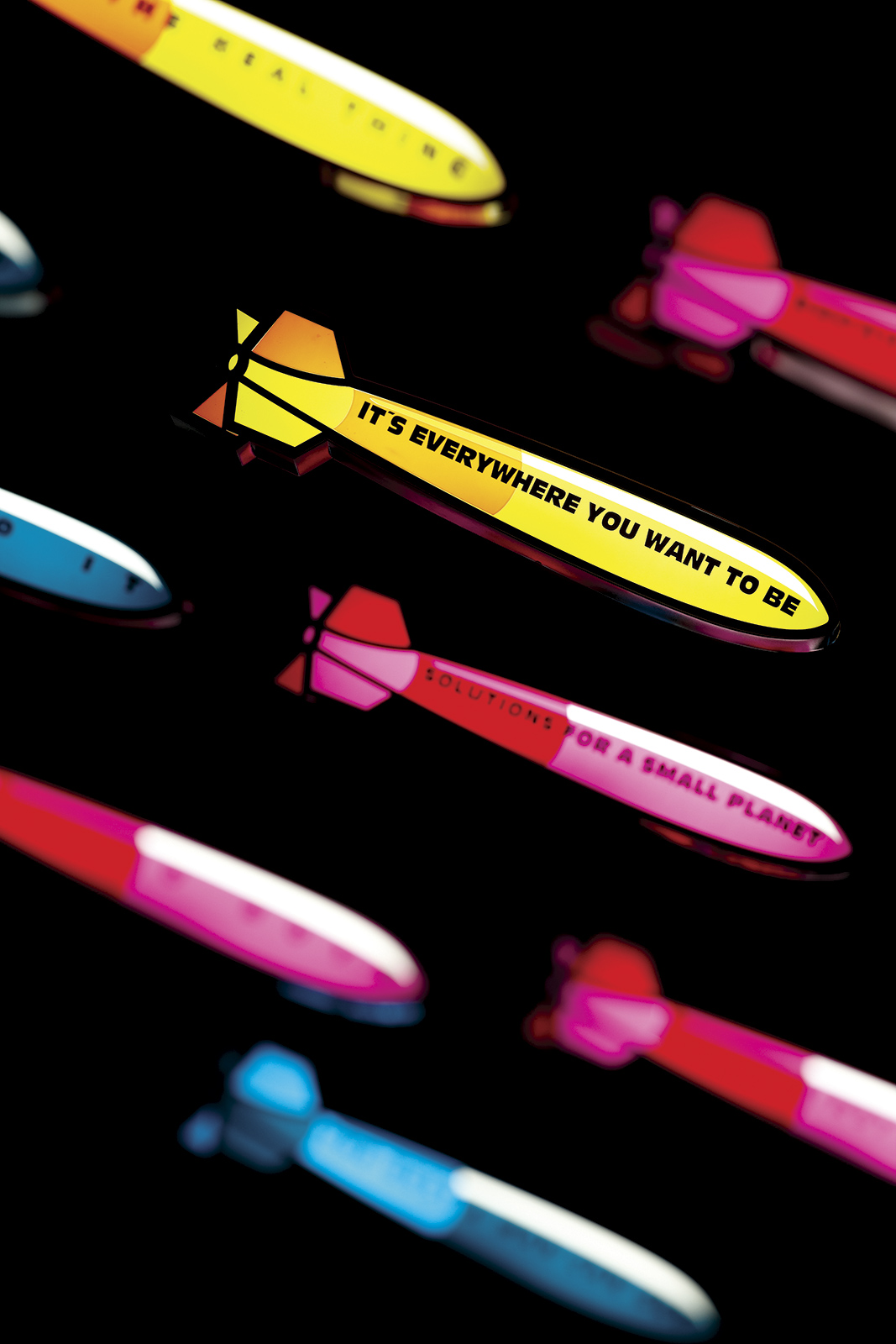 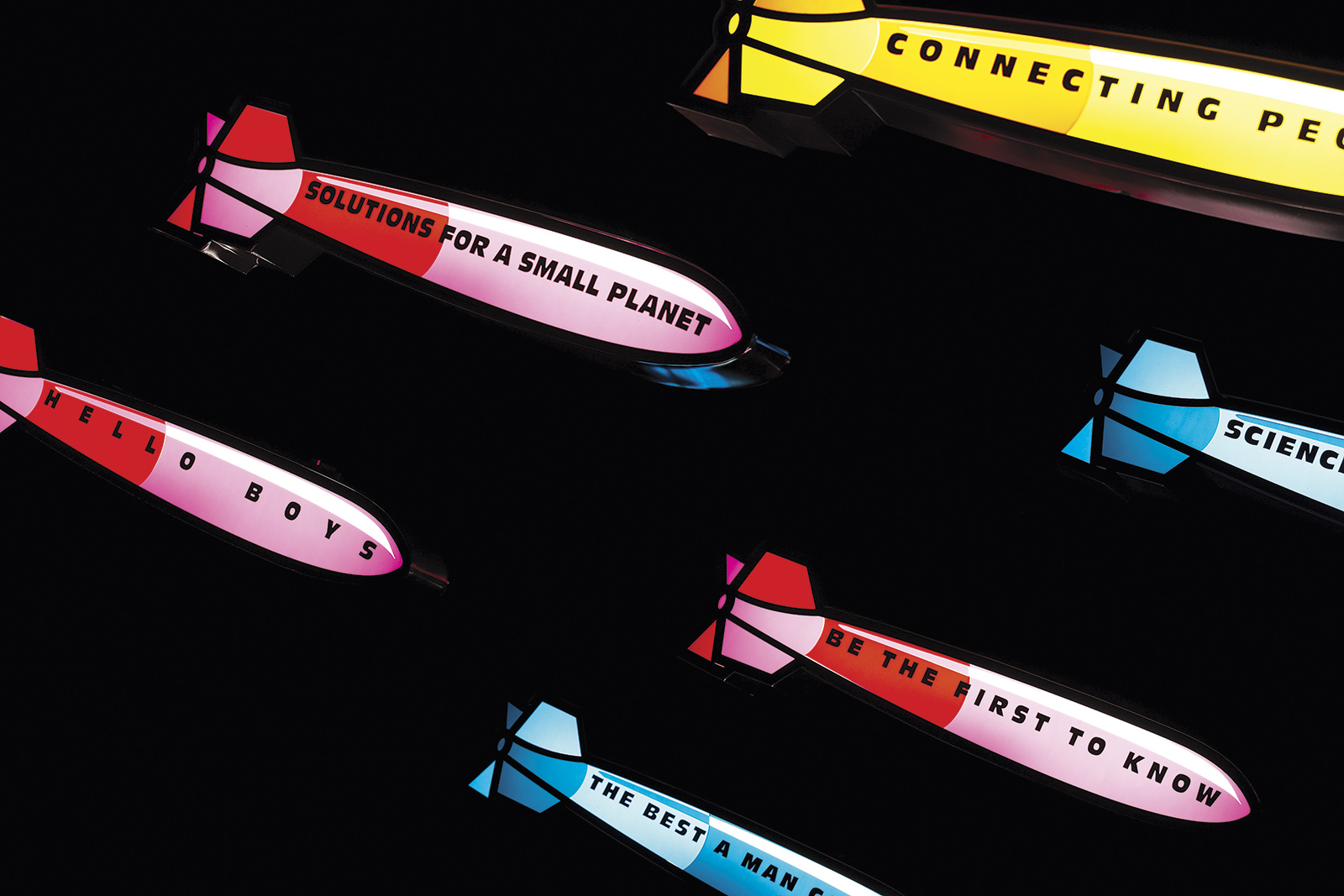 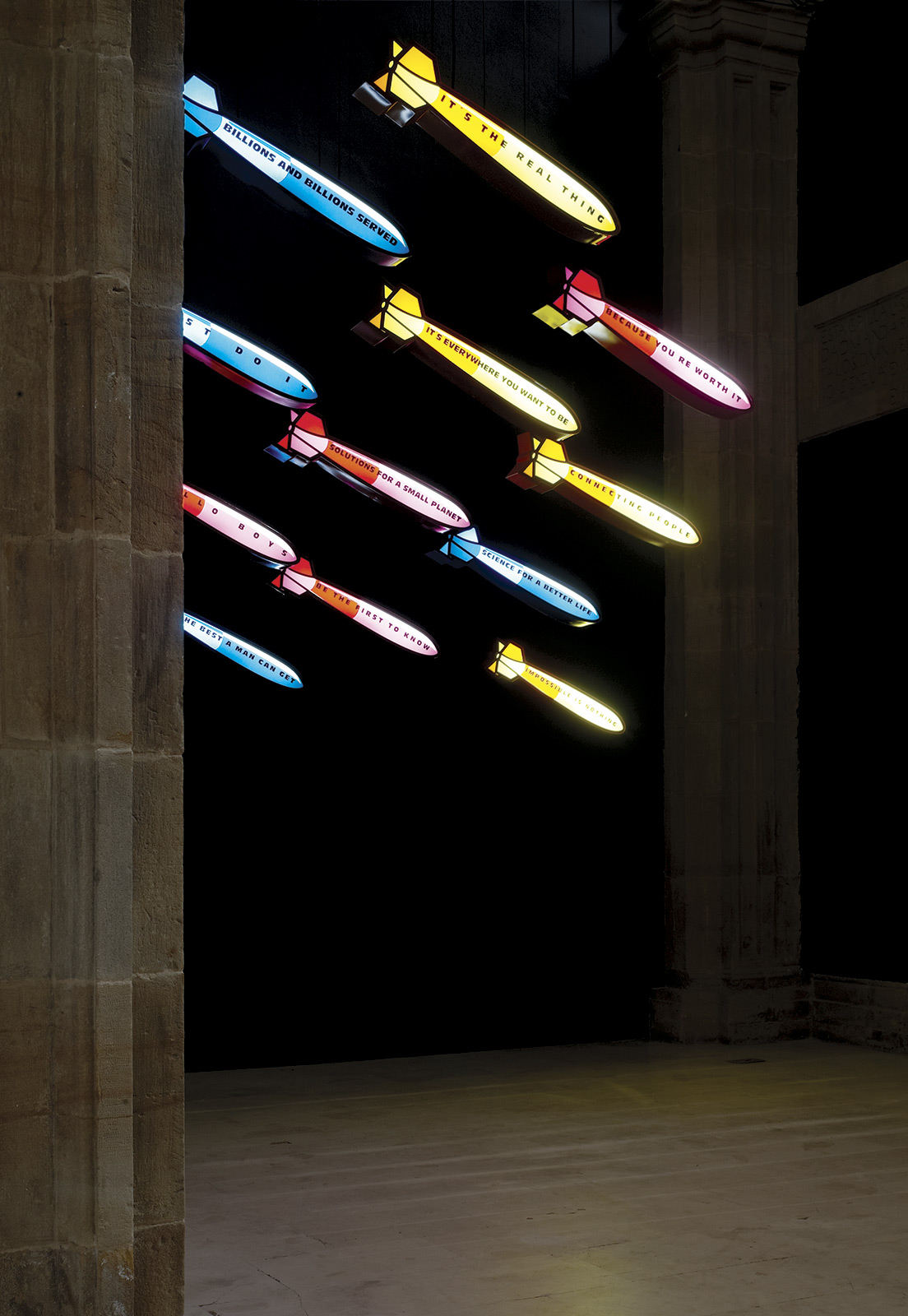 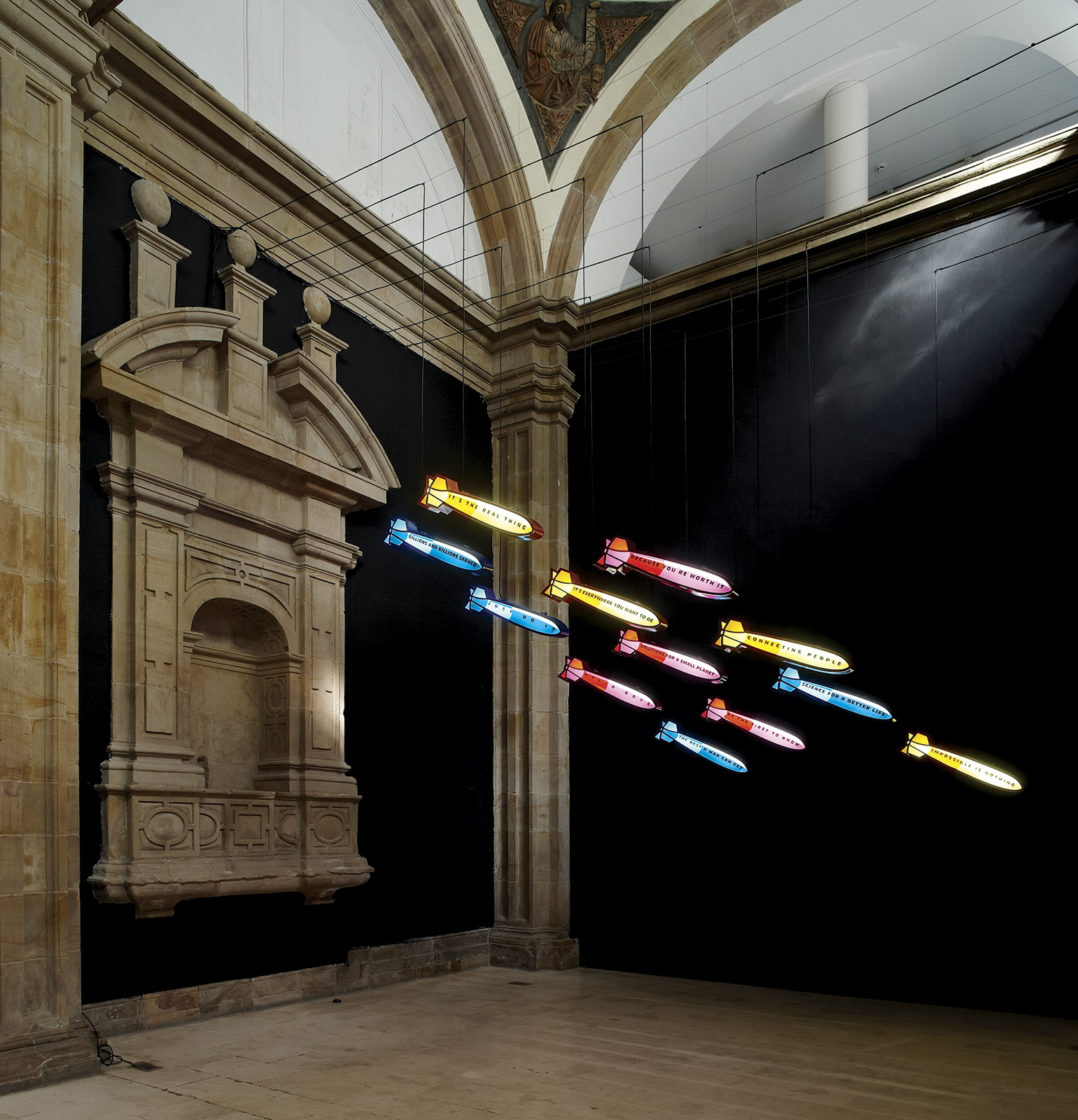 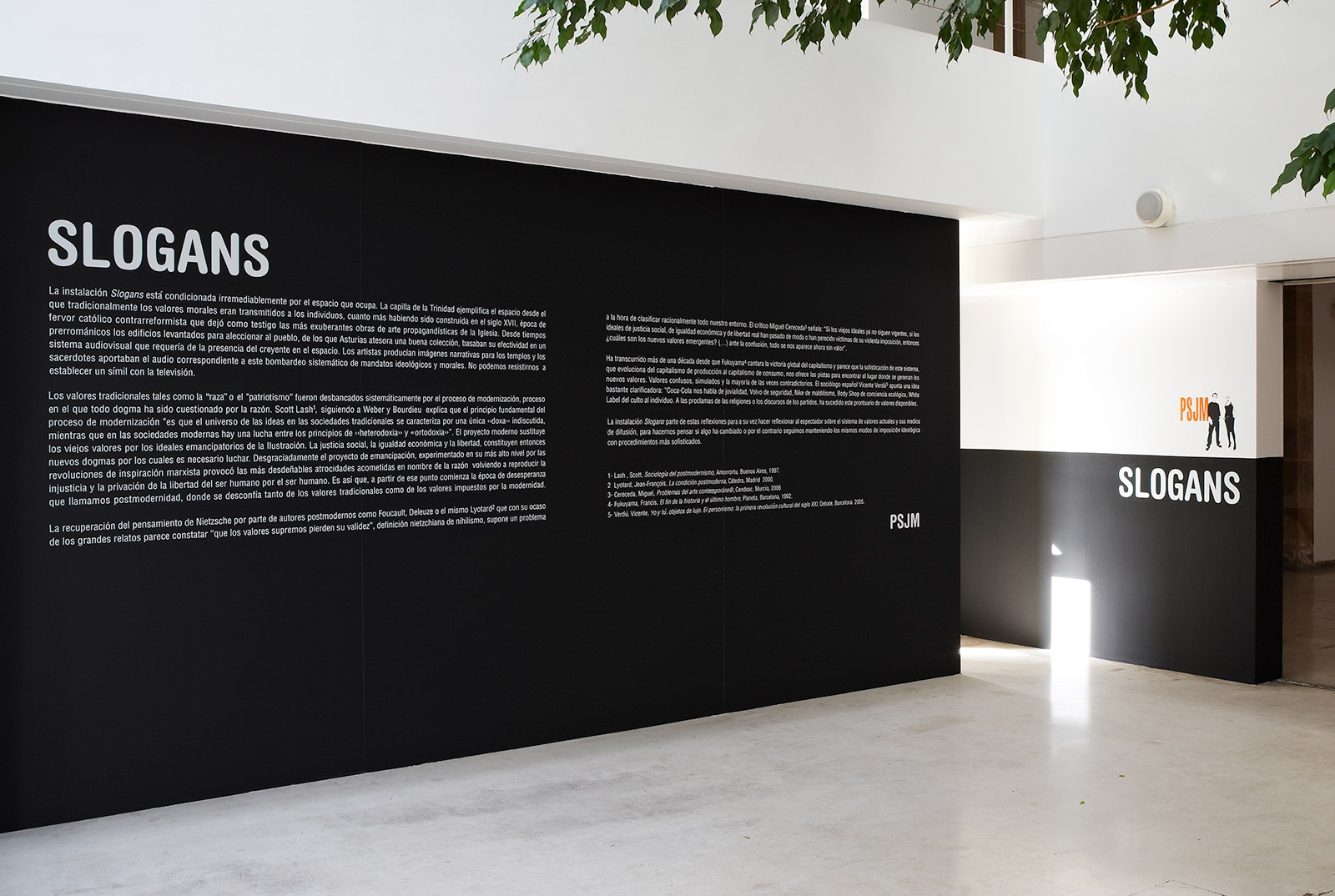 The installation Slogans is inevitably conditioned by the space it occupies. Trinidad Chapel exemplifies the space from which moral values were traditionally transmitted to individuals, all the more on account of having been built in the 17th century, a period of Counter-Reformation Catholic fervour that left a legacy of the Church’s most exuberant works of propagandistic art. Since Pre-Romanesque times, the buildings raised to teach the people –of which Asturias boasts a fair collection– based their effectiveness on an audiovisual system that required the presence of the believer within the space. Artists produced narrative images for the temples and priests contributed the audio corresponding to this systematic bombardment of ideological and moral mandates. We cannot avoid establishing a simile with the television.

Traditional values such as “race” or “patriotism” were systematically ousted by the process of modernisation, a process in which all types of dogma have been questioned by reason. Following Weber and Bourdieu, Scott Lash[1], explains that the fundamental principle of the process of modernisation “is that the universe of ideas in traditional societies is characterized by one single undisputed doxa, while in modern societies a battle exists between the principles of heterodoxy and orthodoxy”[1]. The modern project substitutes old values for the emancipative ideals of the Enlightenment. Social justice, economic equality and freedom thus constitute new dogmas for which it is necessary to fight. Unfortunately, the project of emancipation, experienced at its highest level by the revolutions inspired by Marxism, led to the most appalling atrocities committed in the name of reason, once more reproducing injustice and the privation of freedom of human beings by human beings. And so, from this starting out point commences the period of desperation that we call postmodernism, in which traditional values are mistrusted along with the values imposed by modernism.

The recovery of Nietzsche’s thinking by postmodern authors such as Foucault, Deleuze or even Lyotard, who, with his notion of the demise of the grand narratives, seems to state “that supreme values lose their validity”[2], a Nietzschean definition of nihilism, constitutes a problem when rationally classifying our whole environment. The critic Miguel Cereceda states: “If the old ideals are no longer valid, if the ideals of social justice, economic equality and real freedom are no longer in vogue or have perished victims of their violent imposition, then what are the new emerging values? (…) faced with this confusion, everything now appears valueless”[3].

More than a decade has passed since Fukuyama[4] proclaimed capitalism’s global victory and it seems that the sophistication of this system, which evolves from production capitalism to consumer capitalism, offers us clues to find the place where new values are generated. Confused, simulated and oftentimes contradictory values. The Spanish sociologist Vicente Verdú puts forward a fairly clarifying idea: “Coca-Cola talks to us of joviality, Volvo of safety, Niké of rebelliousness, Body Shop of eco-awareness, White Label of the cult of the individual. The edicts of religions or the discourses of political parties have been succeeded by this handbook of available values”[5].

The installation Slogans started out from these reflections with the aim, in turn, of making the viewer reflect about the current system of values and its means of dissemination, to make us consider whether anything has changed or, to the contrary, we continue to maintain the same forms of ideological imposition with more sophisticated procedures.