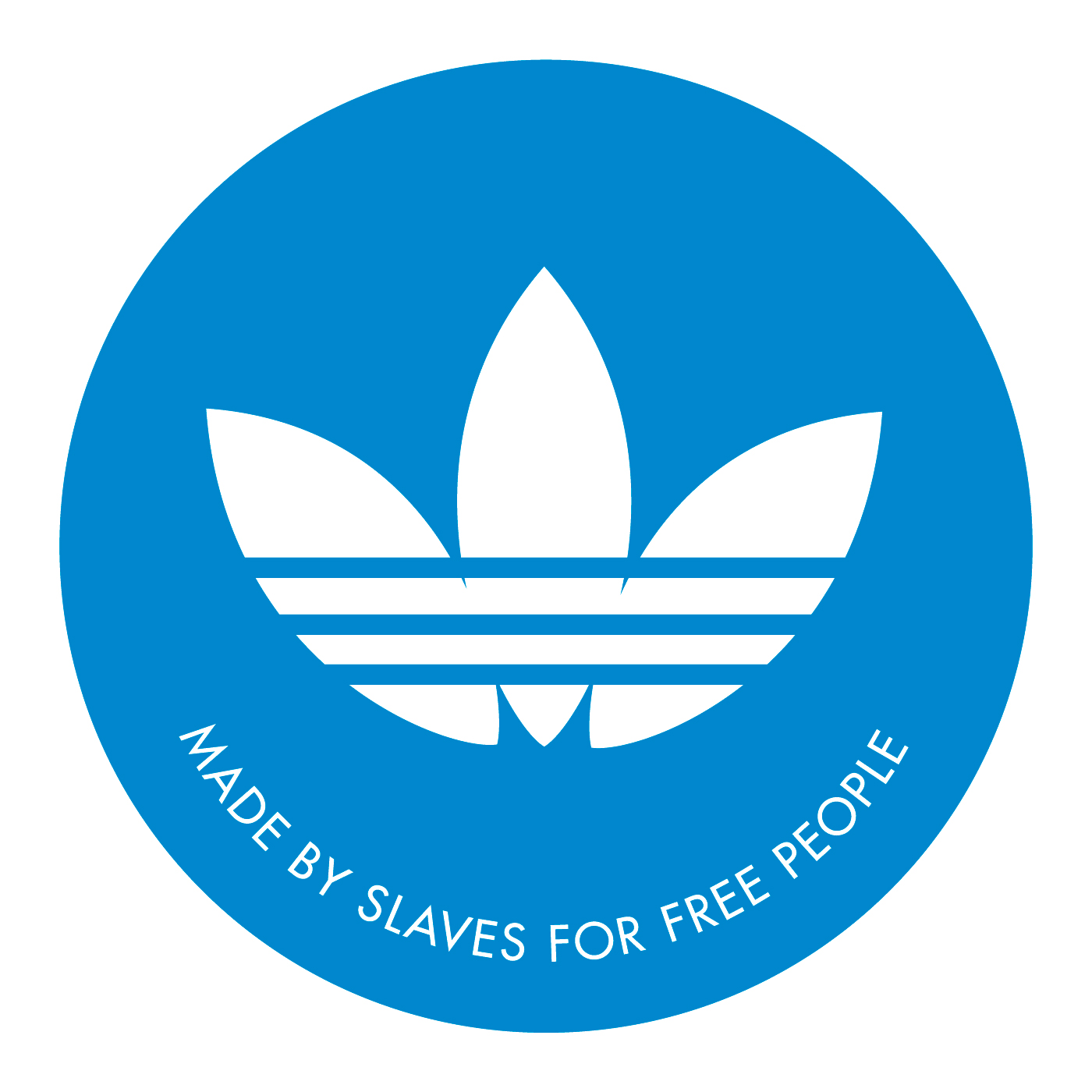 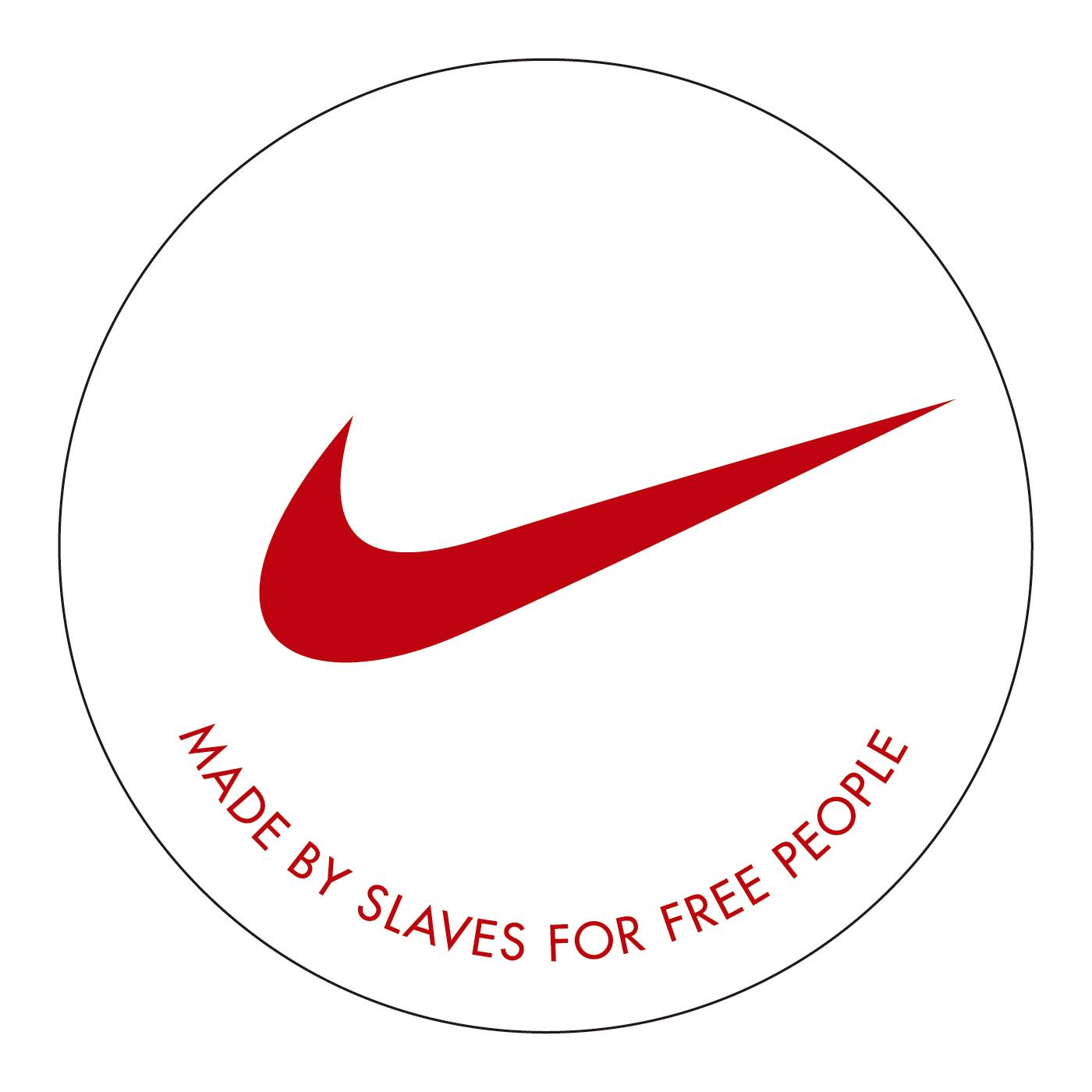 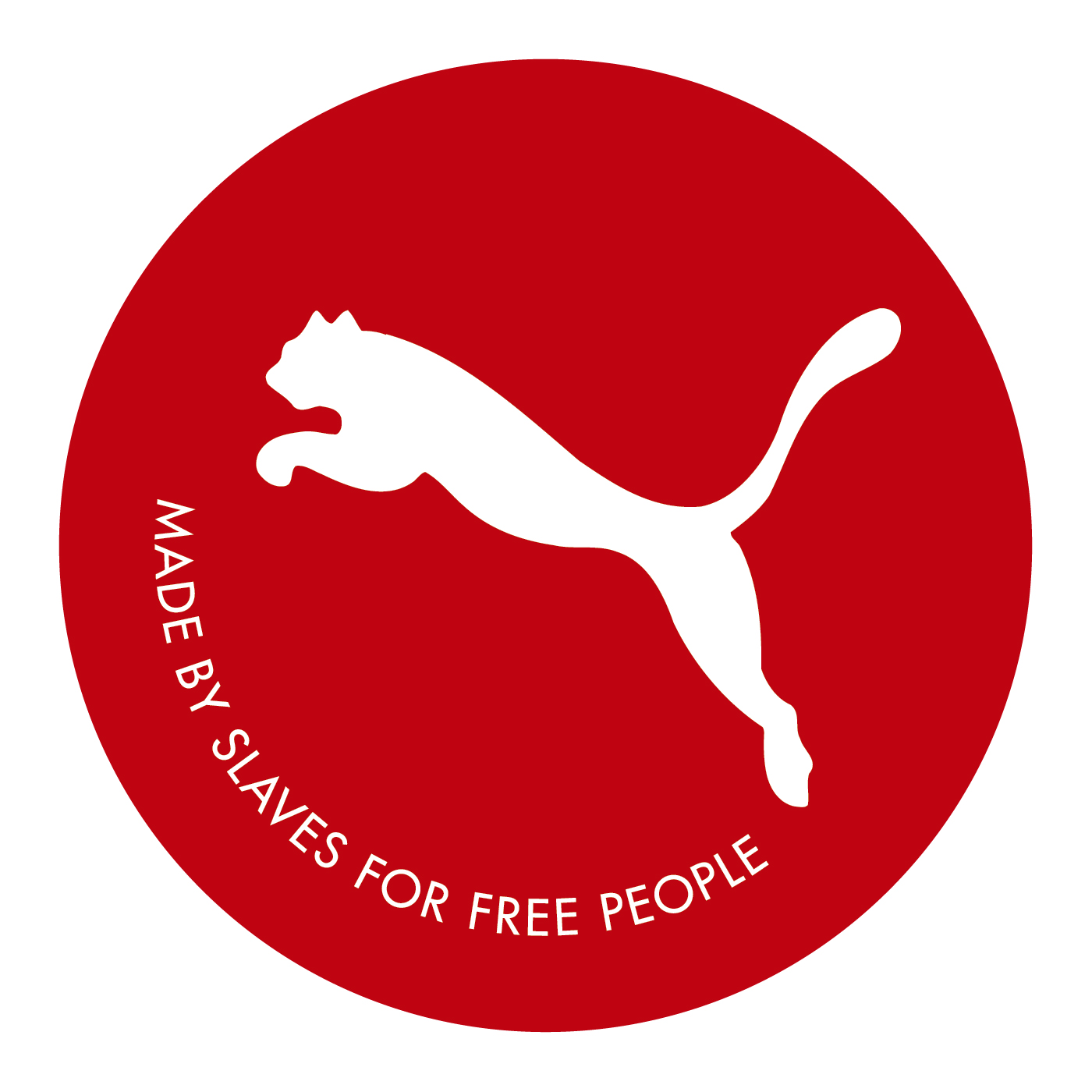 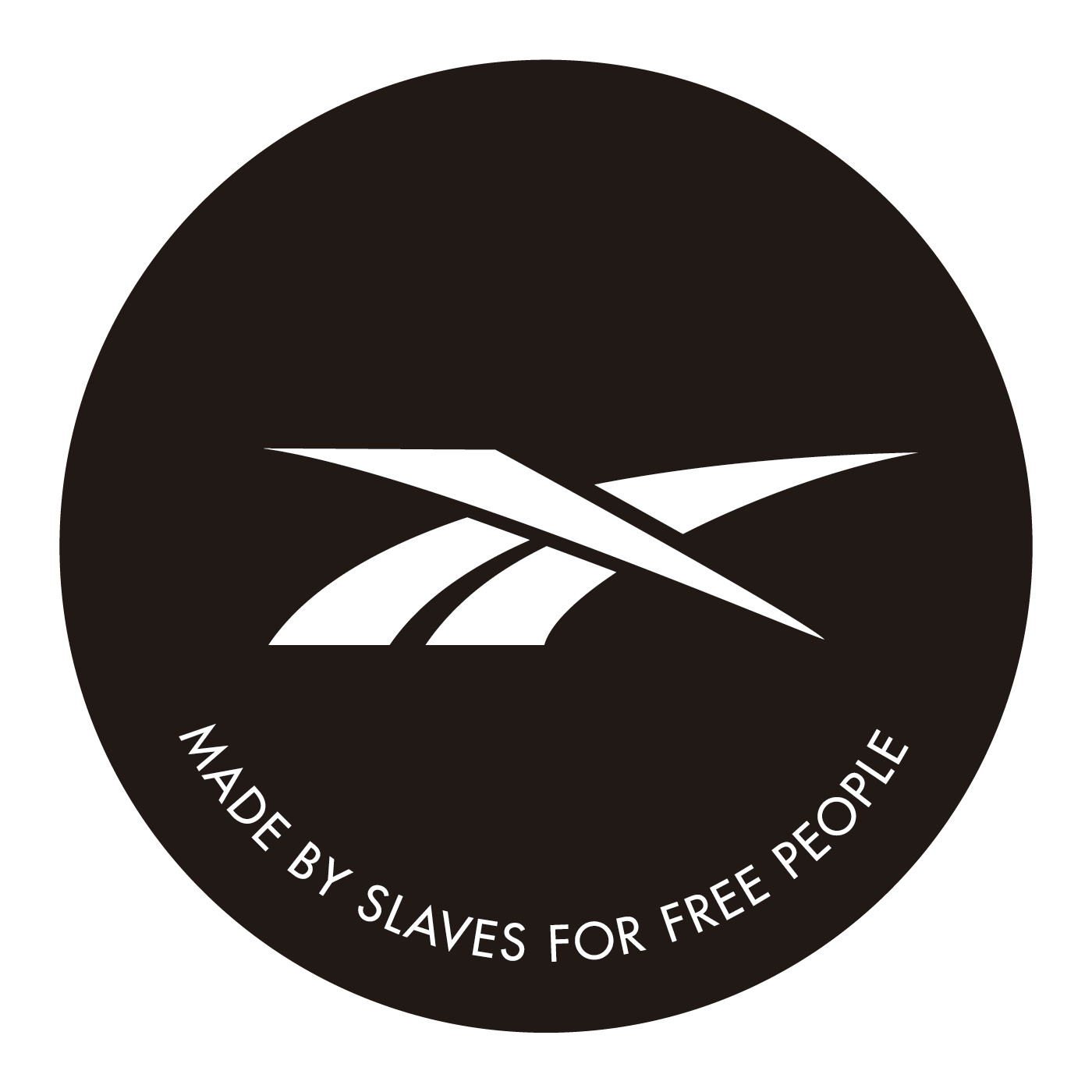 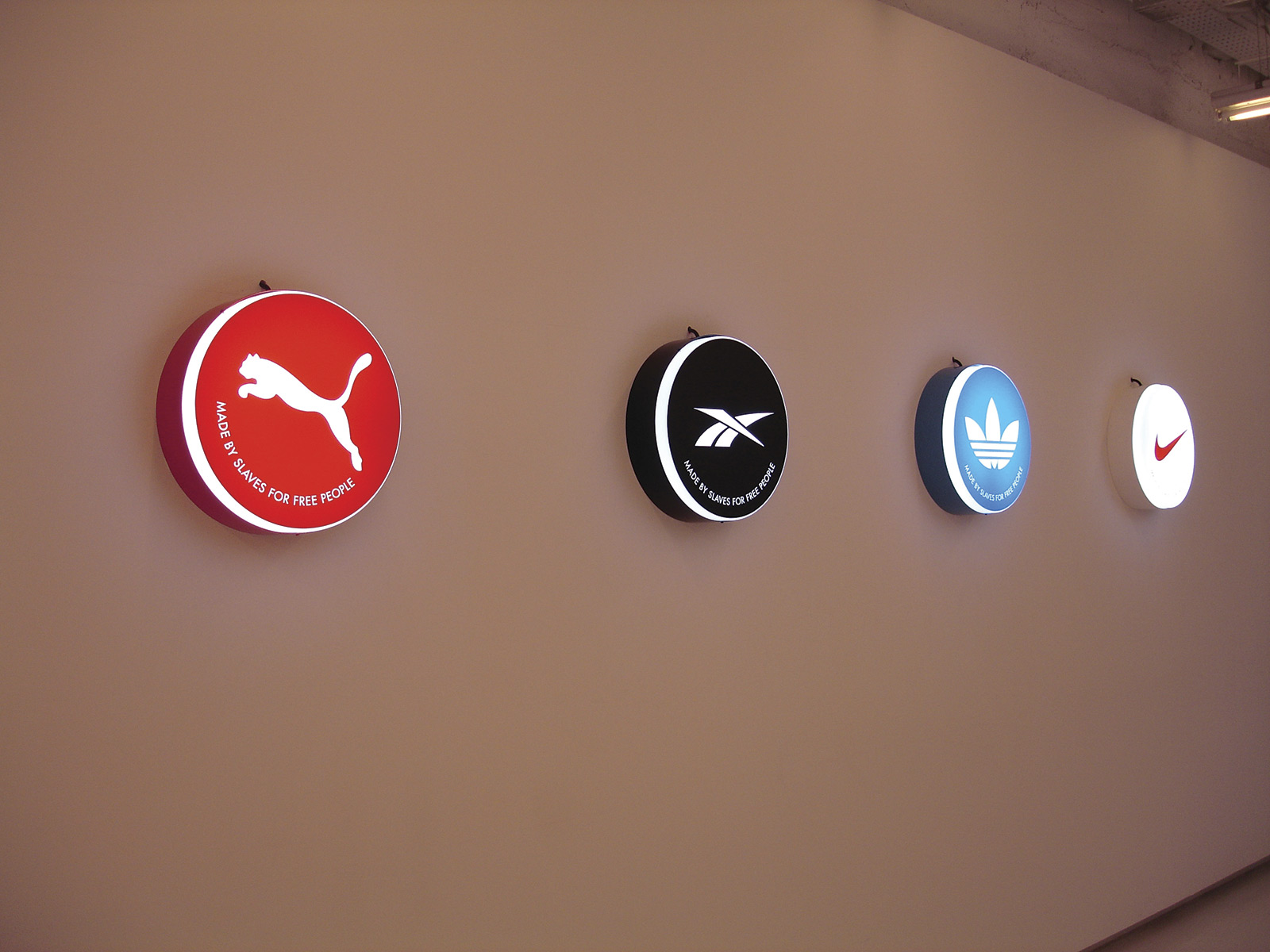 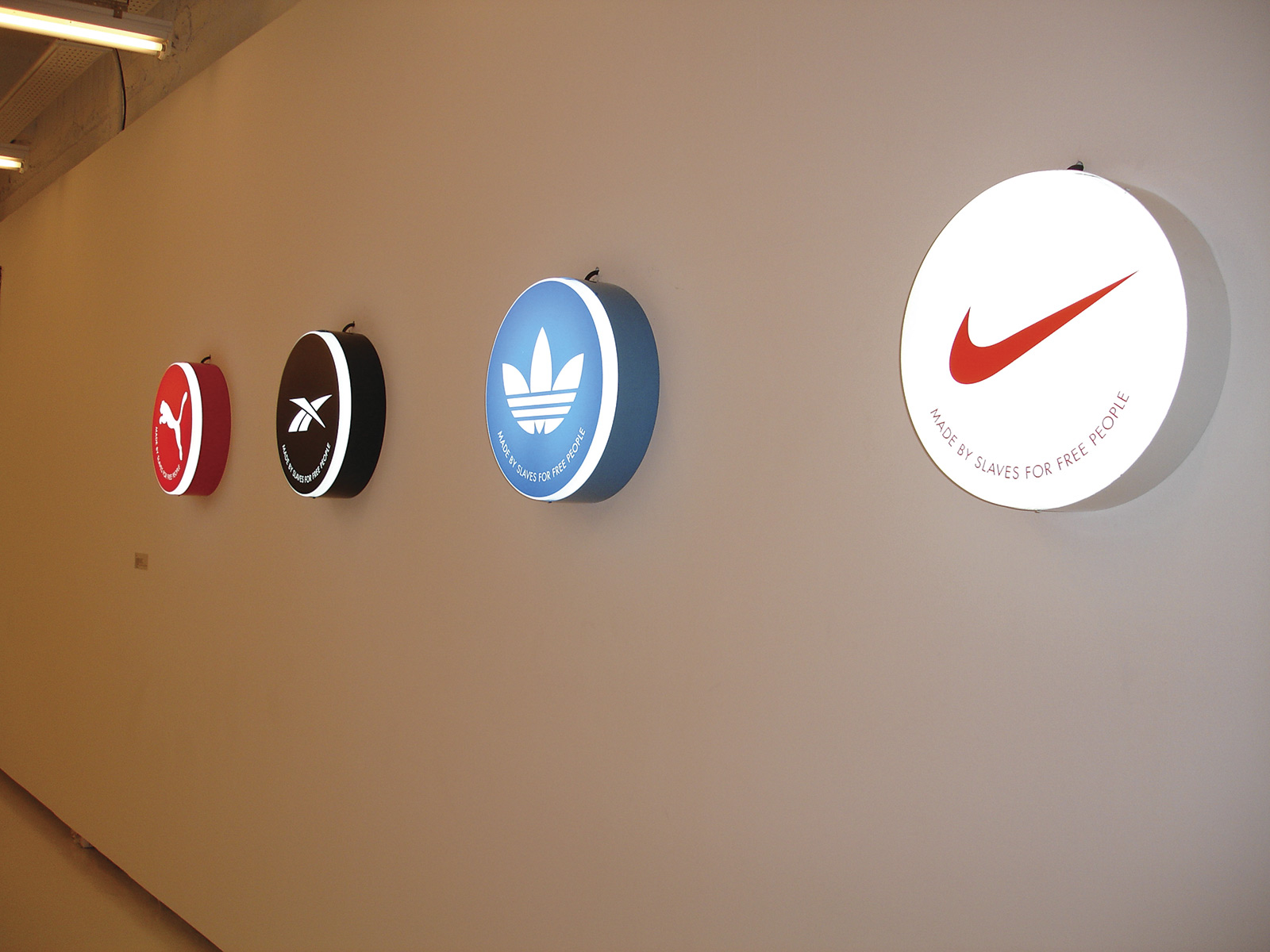 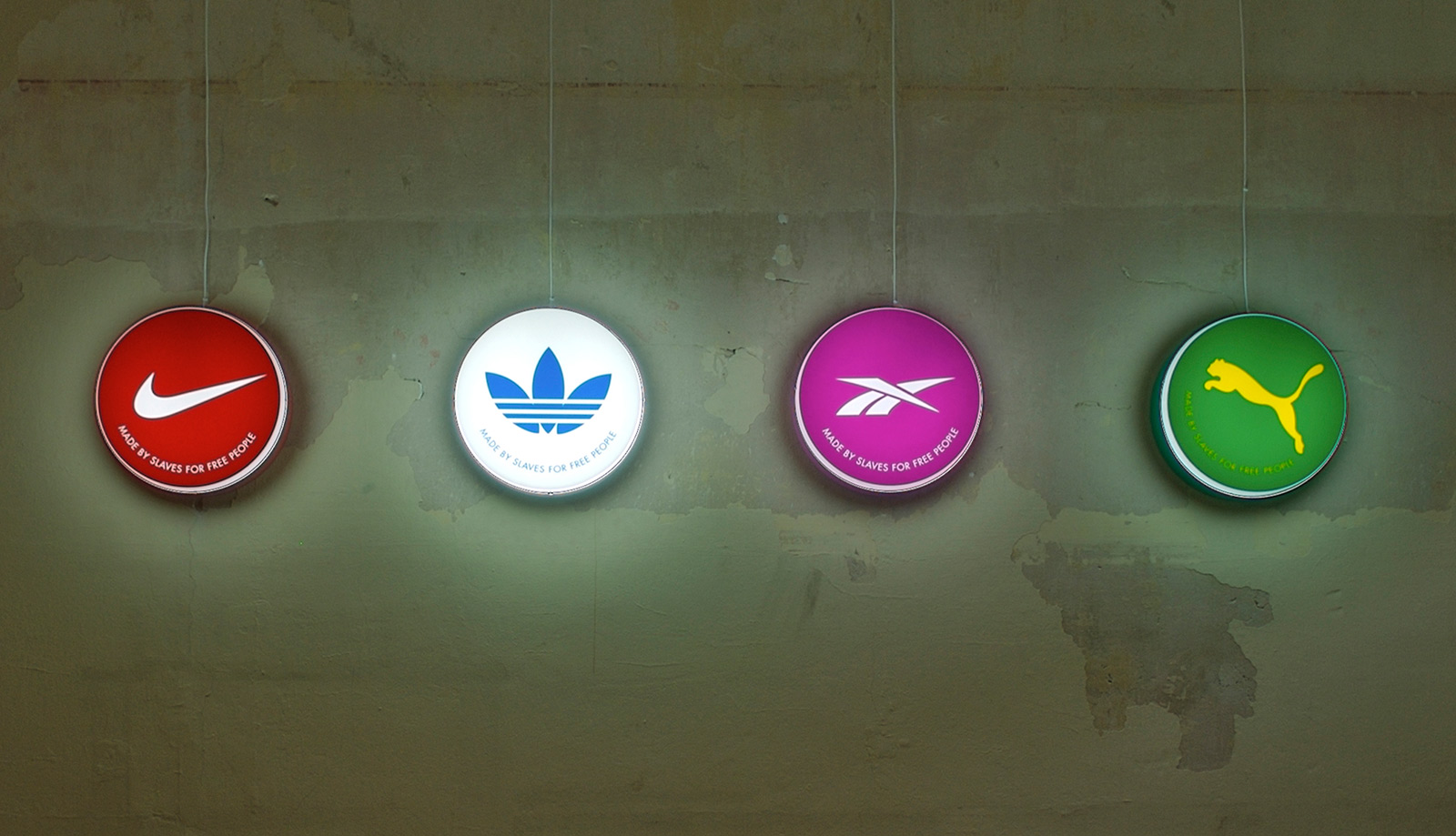 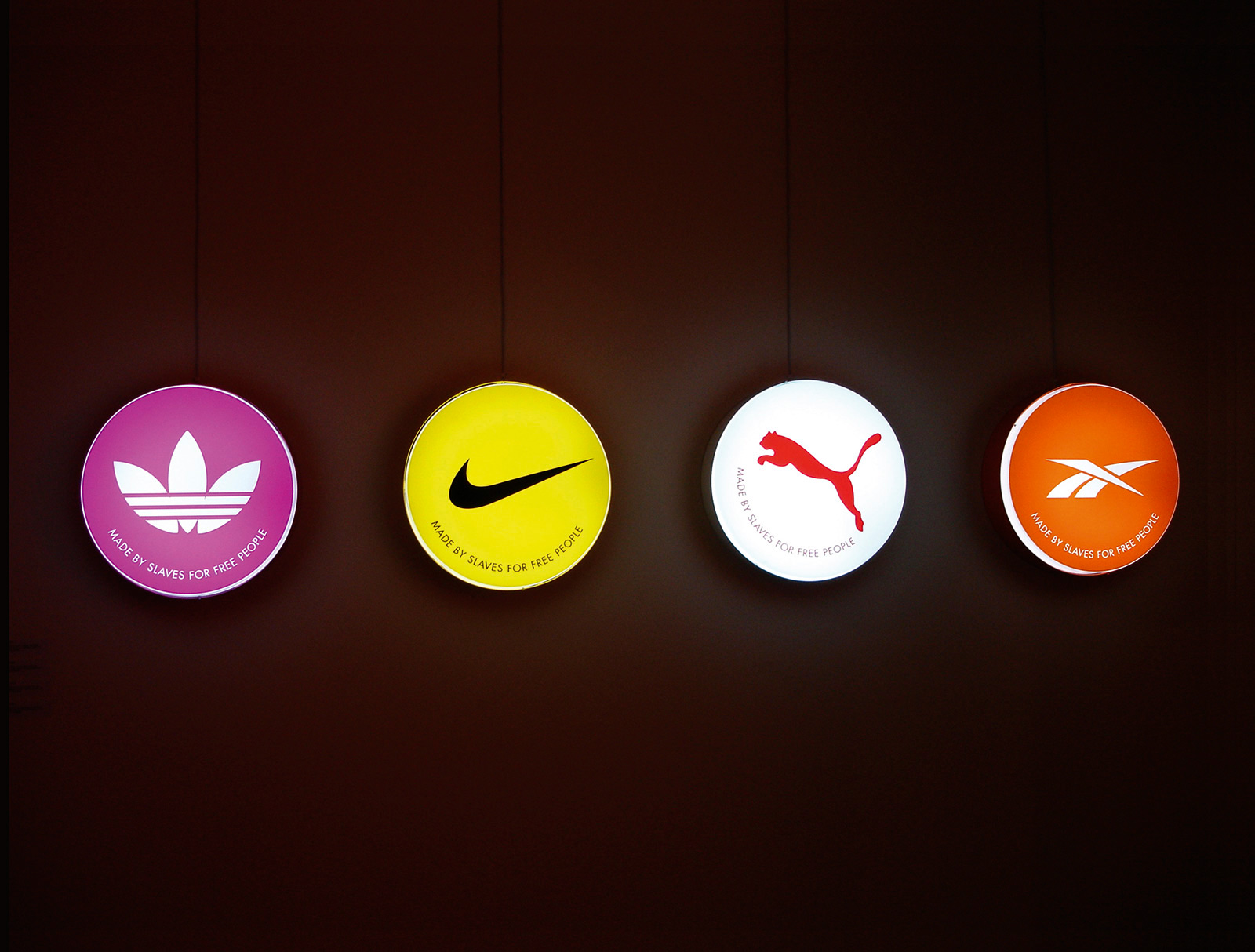 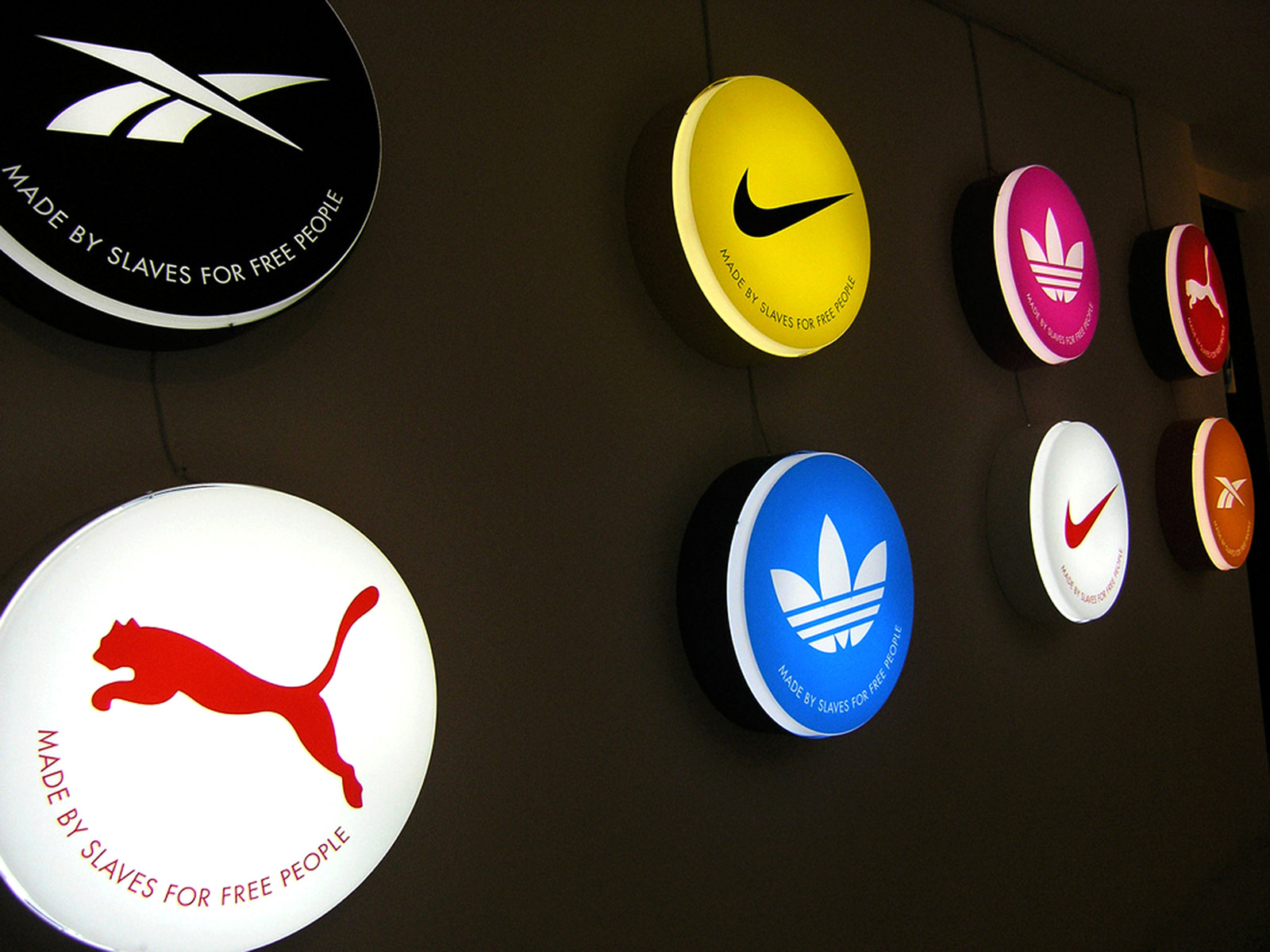 The censored work “Project Asia” was born as a proposal for public spaces. Specifically, it was placed in the Plaza Mayor of Gijón, from where it was withdrawn due to pressure from the brand Adidas. In the line of work developed by PSJM, the team-brand targets the contemporary universe of brands as creators of symbolic values, abstract identities that shape the individual’s own identity. The great multinational trademarks, true symbols of capitalist democracy born in free countries, base their race towards maximum profits in the exploitation of Asian workers. For these large corporations, locating their factories in countries where labour conditions for workers are ignored, or where they even prohibit unionism by means of threats, does not pose any contradiction to the messages later transmitted to forge their brand values, always related to individual freedom and the drive for self-improvement. “Project Asia” presented four of these brands in lit displays under one and the same slogan, MADE BY SLAVES FOR FREE PEOPLE, pointing out the irony in the values that they really represent.

Intervention in Plaza Mayor (Main Square) of Gijón and removal of the work.
December 2005.

In 2017, the work “Project Asia” is again censored, this time in Marseille and in a public institution that depends on the French Ministry of Culture.

«In July 2016 we received a lona request for the project “Project Asia” to take part in the exhibition «Nous sommes foot» curated by Florent Molle and Gilles Perez, at the Mucem (Musée des civilizations de l’Europe et de la Méditerranée). We sent the work from Bordeaux, where it was exhibited at the Musée d’Aquitaine during 2016. We signed a loan contract in May 2017. In June we were paid the fees and, on two occasions, they asked us for instructions to assemble the light boxes. In that moment, we informed about the exhibition through our social media and, surprise! On the same day of the inauguration, we received an email asking us an address to return the pieces because they would no longer be part of the sample. Without giving any explanation, or anything close to an apology.

The thing is that the work was hung (you can see the photo here). And later someone passed by and ordered that the piece be removed, against the desire of the curators -according to unofficial information that we have been able to collect.

We have asked for explanations both to the museum and to the curators, but they have not given us any kind of explanatory answer, they are very busy with the exhibition, they say. And they refer us to Jean-François Chougnet, president of the board of directors of Mucem, because it seems that it was him who decided to remove the work from the exhibition.

What’s happening here? Well, this seems like a succulent theme for Hans Haacke’s pieces, because it turns out that the French Football Federation sponsors the exhibition and the main sponsor of the French Football Federation is NIKE. This means that, directly or indirectly, a corporation decides what content is exhibited and what is not in a public institution. That’s the way things are».

DON’T THINK. JUST DO IT!

«After the censorship of Adidas in 2005, we received many expressions of support and much interest in exhibiting the pieces by curators, gallery owners and directors of art centers and museums. Here is a list of the spaces of freedom where the work “Project Asia” has been exhibited in its different editions, after 2005».