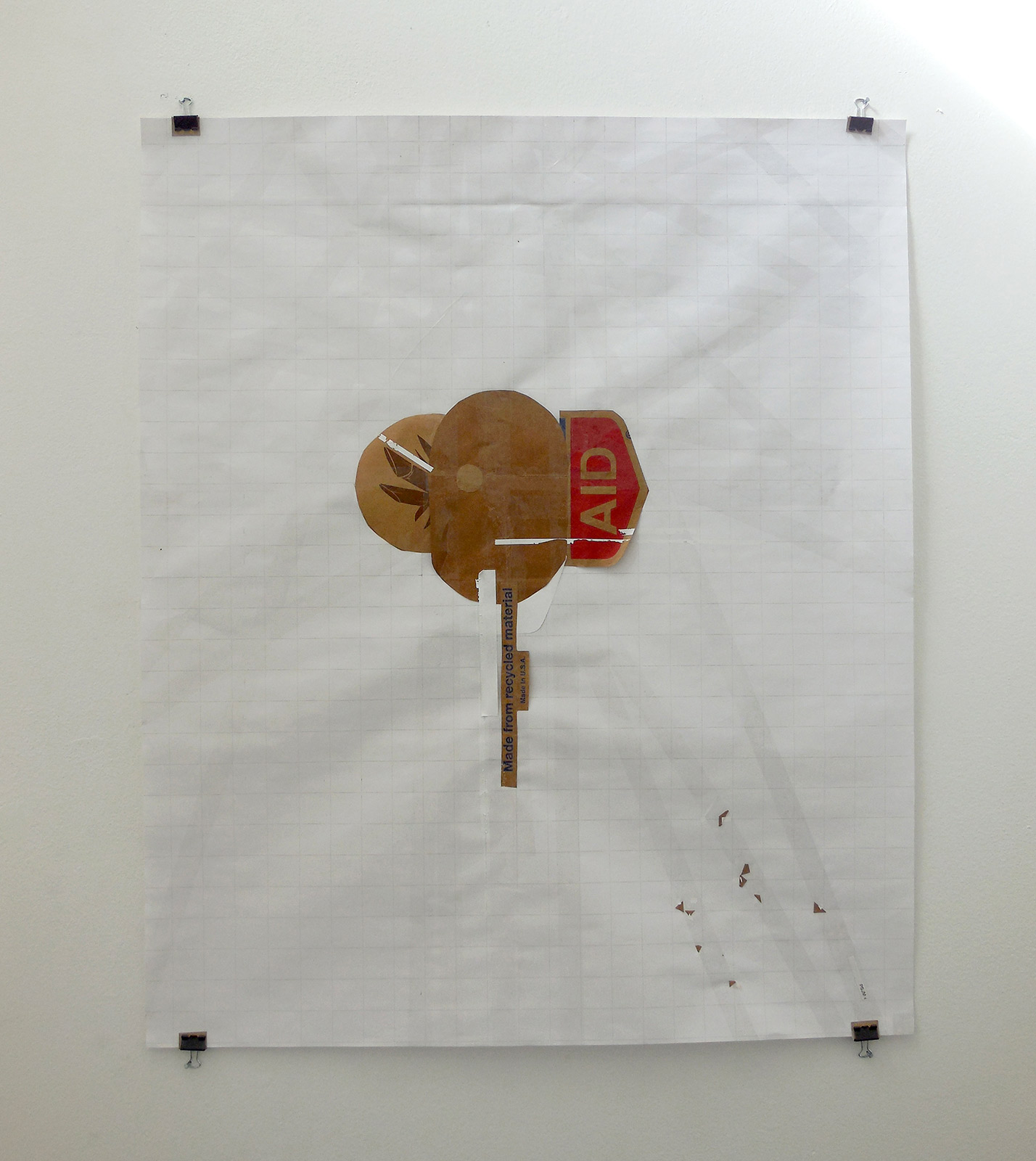 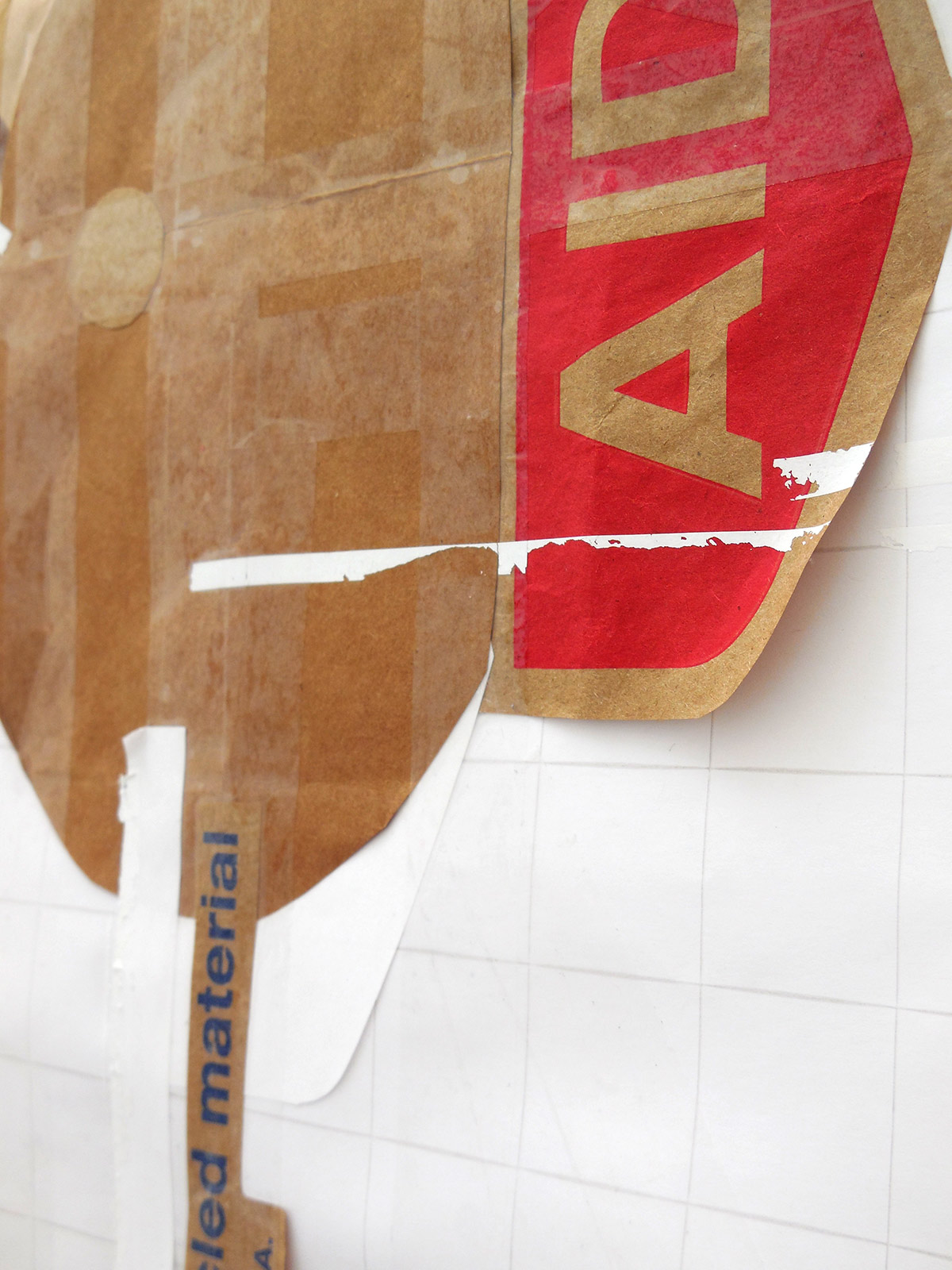 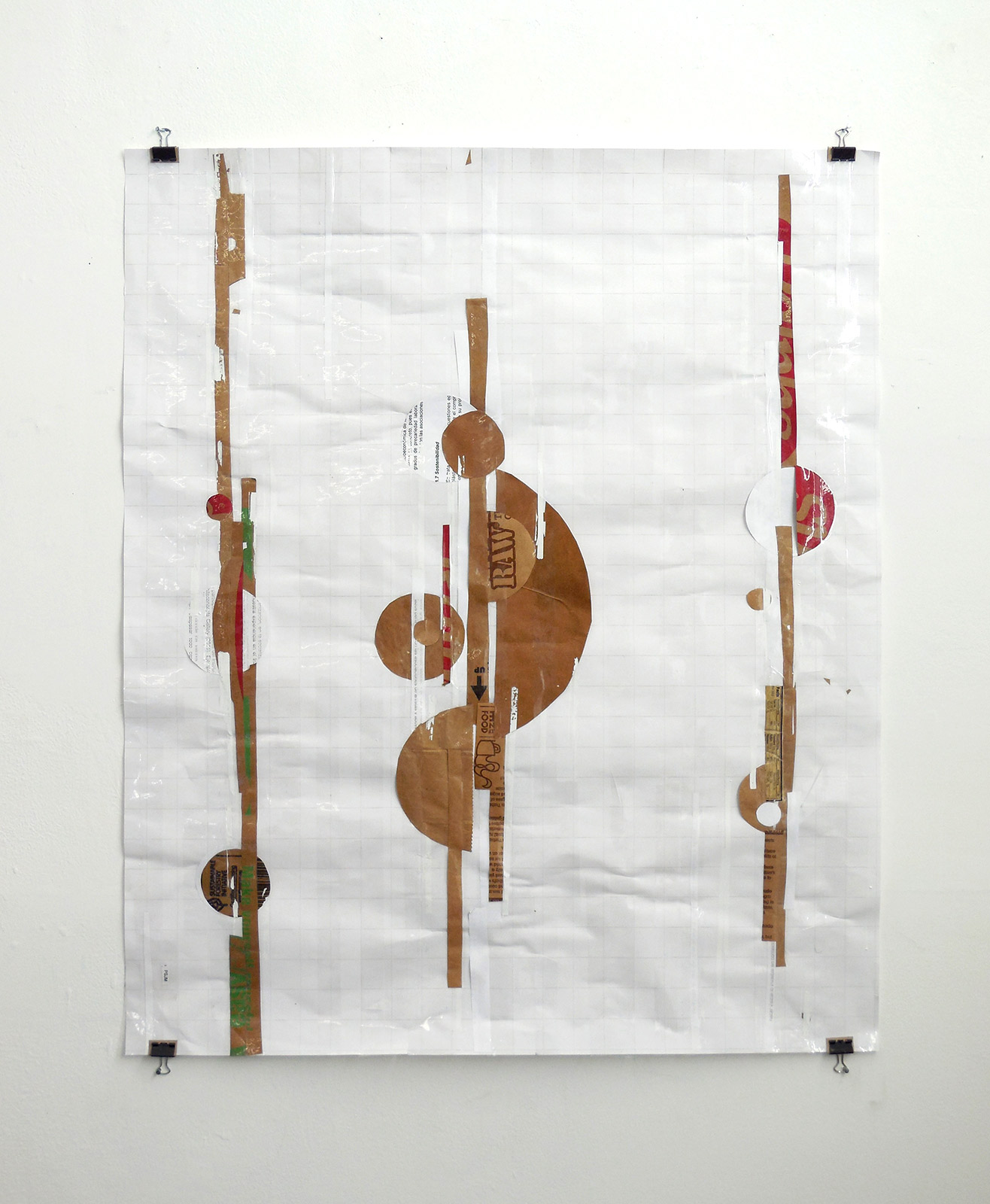 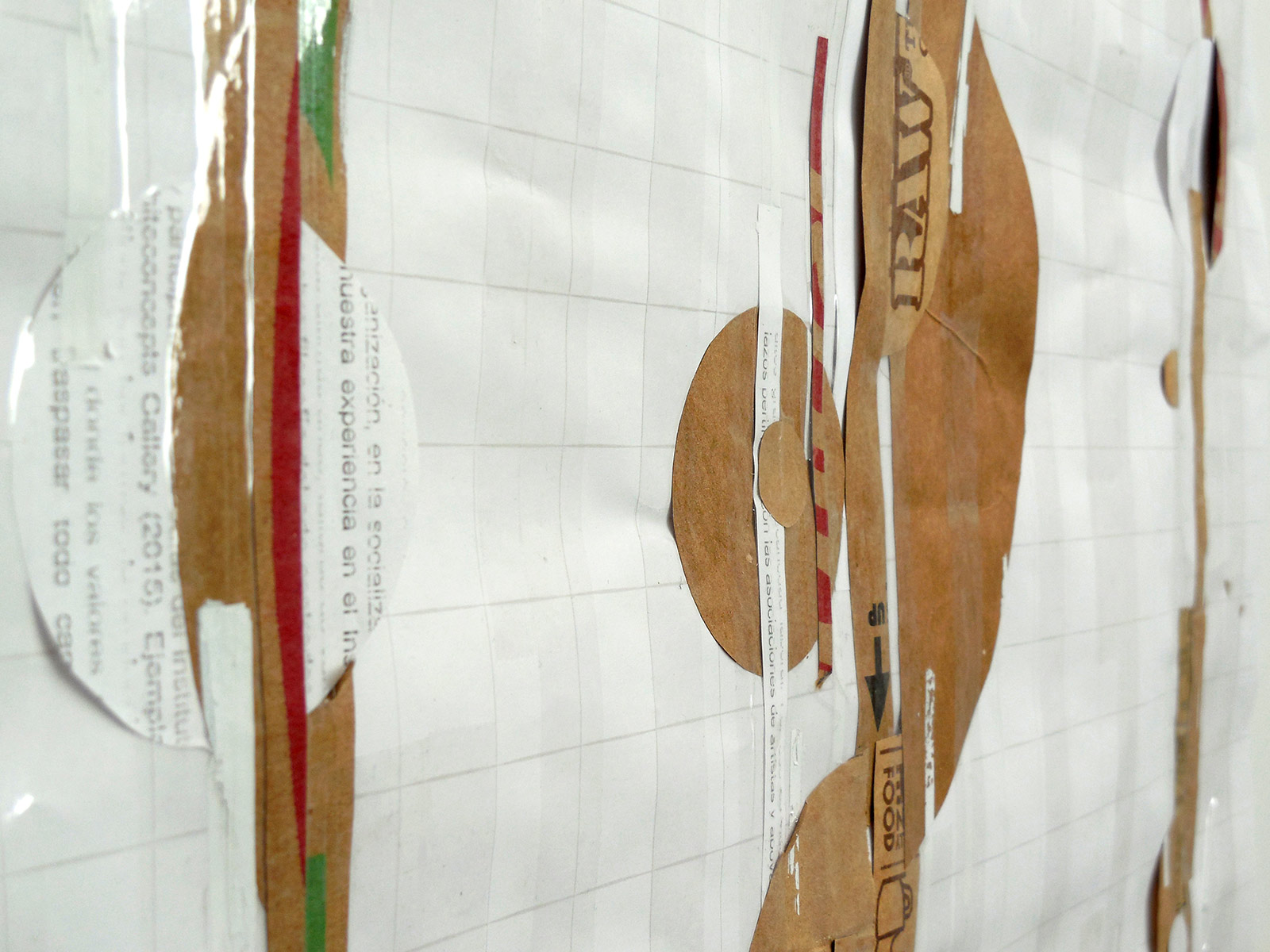 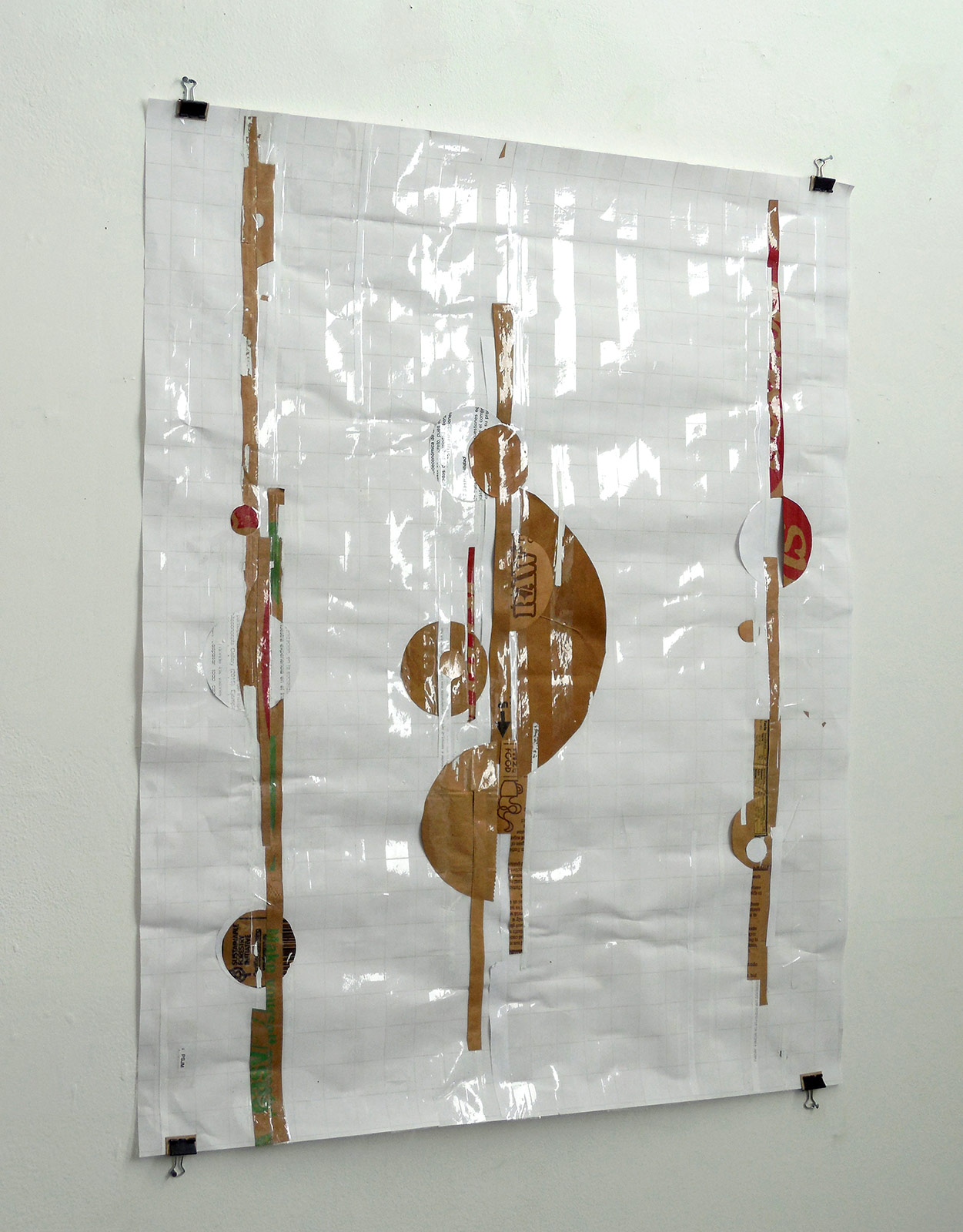 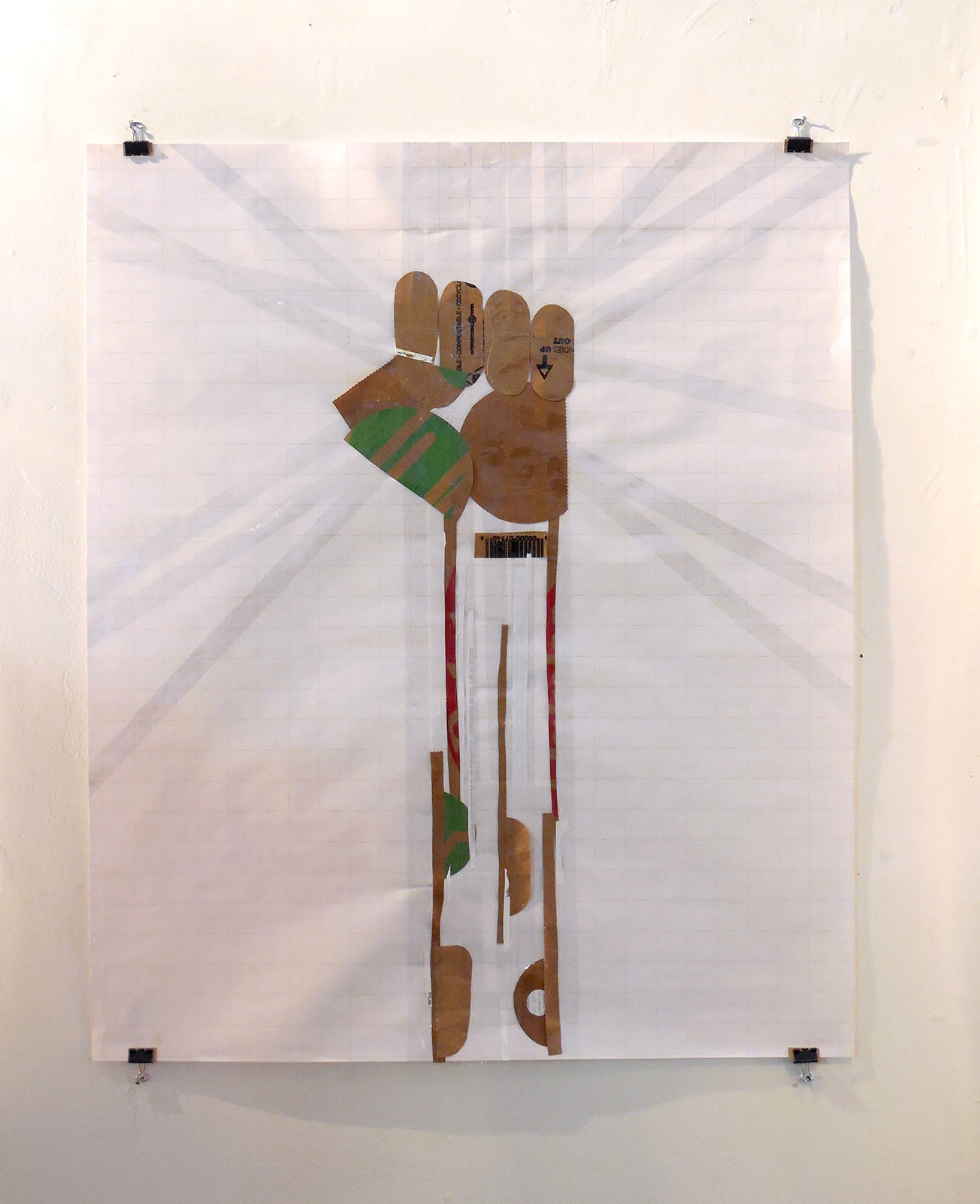 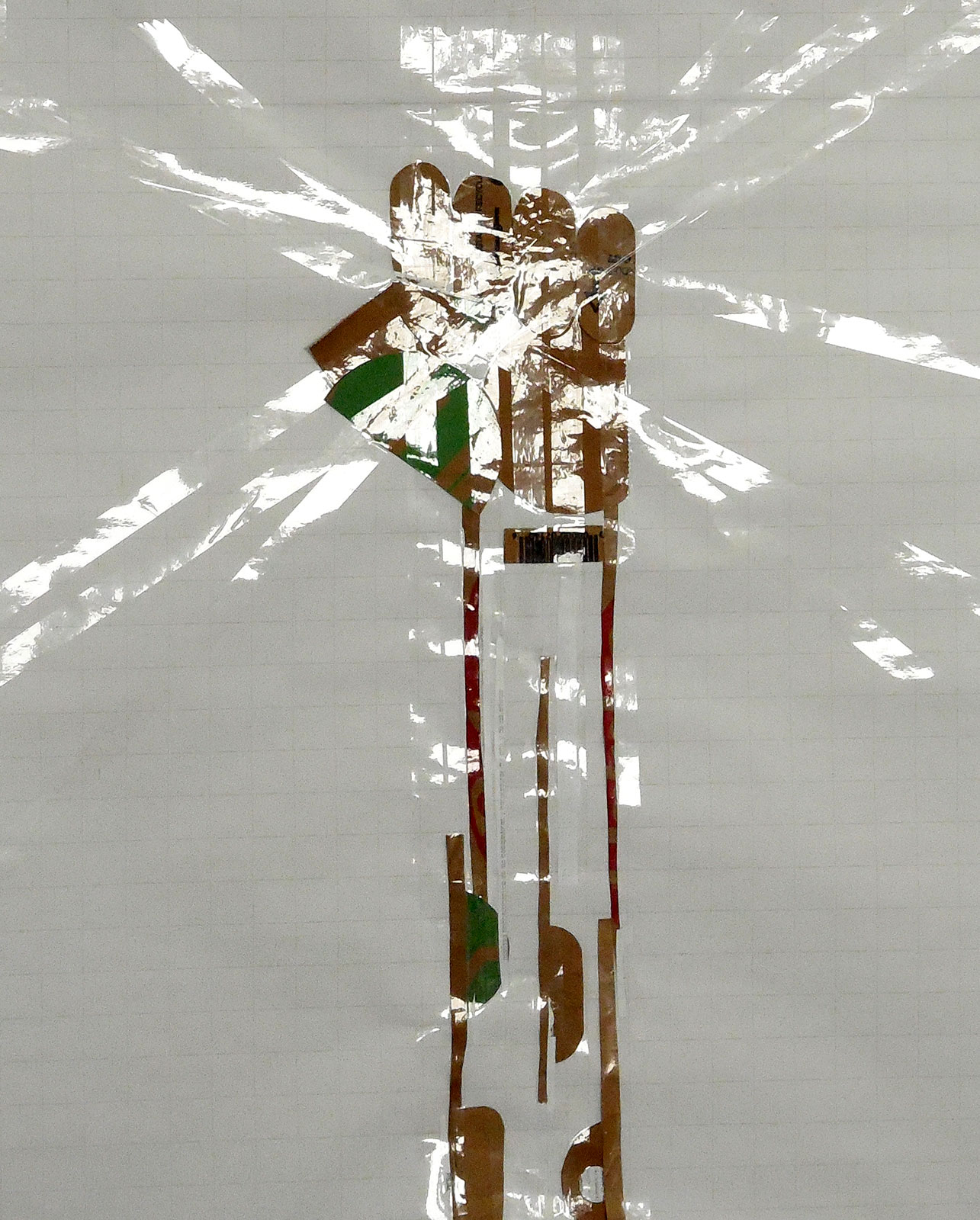 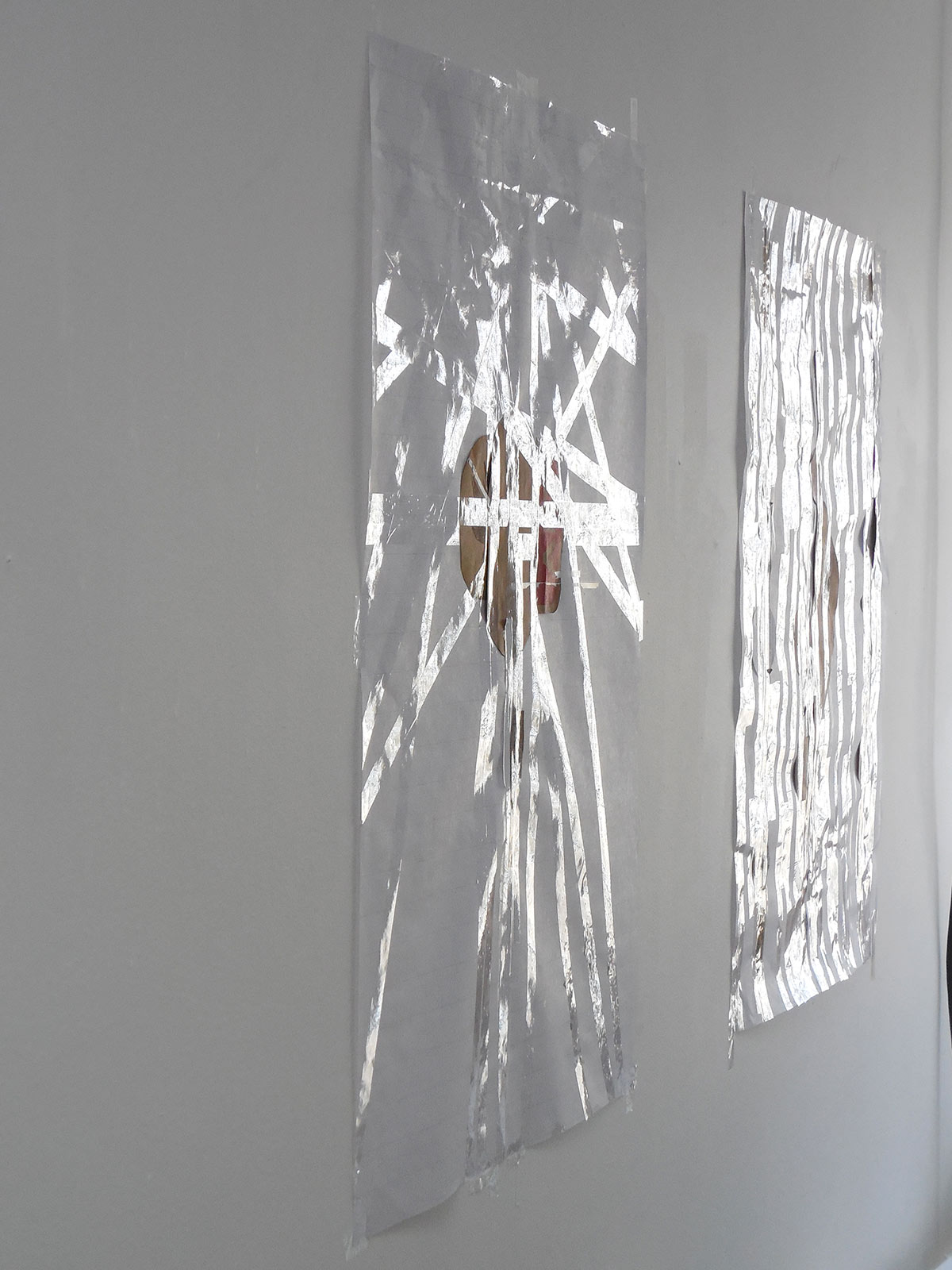 The political message of materials

The three collages that make up “California Bio-packs & Office Supplies” are part of the work done during PSJM’s stay in the residency program at the 18th Street Arts Center in Santa Monica (December 2015-January 2016). In addition to these collages, various theoretical and conceptual graphics were produced, and a mural project was devised for the city of Los Angeles, from which the first steps were taken. A project that connects with the environmental concerns that PSJM has stated with other works such as “Natural History”. In that series, the selection of materials and technique used were already charged with economic-political significance. Now, with these Californian collages, the very own elements selected for their production directly become the protagonists. The materials used, on the one hand, the tippex, the common adhesive tape and the large gridded post-it, refer to the production (immaterial), to the daily world of the office; on the other hand, the cuts of sustainable packaging of organic products, evoke the world of (political) consumption, they talk about food, the basic economy (infrastructure), but also the image, the inevitable marketing (superstructure).

It relates an experience, a vital and professional experience, whose remains, organized and submitted to the compositional work come both from the material that PSJM uses to create theoretical arguments and carry out management and planning and from the foods that are in the supermarket, that great symbol of American consumer identity, which in California takes great emphasis of ecological responsibility. Although the US is currently suffering one of the biggest environmental disasters in history with methane gas leaks in Porter Ranch. Once again, economy against nature, calculation without ethics. The remnants of a world that must go away.

In these Californian collages, an experimental research on the technique is also carried out. The technique of collage always results from the tension between the deconstruction of a given reality and the construction of a new reality. With “California Bio-packs & Office Supplies”, the assembly process, the construction phase, is also deconstructed. No adhesive or glue is used. The fixation is conceived as a sandwich, where the bread (support and fixation) is the office, and the filling is the ecological paper that surrounds the Californian consumption. By doing this, there is an unexpected use of the adhesive tape, which is dignified with the creation of graphic lines and games of brightness and contrast. The economy, the everyday, also determine the tools used. All the cuts are made with scissors, not cutters, with something you can easily find in the office. This restriction to the tool and the common material constrains the plastic action while drawing the boundaries of a style; it opens possibilities within the limits of scarcity. They are eco-nomic and eco-logical collages. Eco, from the Greek “oikos“: the house, as a production unit.

«California Bio-packs & Office Supplies» are products of the instant, of the present, of «doing now», of expressing with what there is; with the materials of life and work materials, which in the case of PSJM are almost always the same. In the materials are hidden political semantics, relations of exploitation and calculation, correction and aim, moral norms and ideology. The reason is then secondary, but it is there. More or less abstract results of intuition, some forms evoke the silhouette of an animal or a forest, others intentionally make up a raised fist: the green power under the bar code.